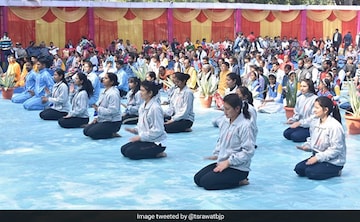 The world’s first Muslim yoga camp began at Kanva Ashram in Kotdwar town of Uttarakhand on Wednesday, with 500 Muslim men and women from different countries participating in the event.

Addressing the participants after inaugurating the five-day event at Kanva Ashram, Chief Minister Trivendra Singh Rawat said besides its health benefits yoga has an elevating effect on the way one looks upon things.

“Yoga elevates our heart, mind and thoughts to such a level that we begin to care for all. It leads us towards universal welfare,” Mr Rawat said.

“Yoga has nothing to do with any religion. It cures us of all ailments and connects us with each other,” he added.

Ayush Minister Harak Singh Rawat congratulated organisers of the camp, saying it will send a healthy message to the world that yoga does not belong to a particular religion and is beneficial for entire humanity.

The event, which is being held at the golden jubilee function of the Vedic Ashram Gurukul Vishwavidyalaya at Kanva Ashram in Kotdwar, will conclude on November 24.

The chief minister also spoke on the iconic status of Kanva Ashram and announced that Kotdwar will soon be named Kanva Nagri Kotdwar.