Why are Delhi University Teachers Out on the Road?

In Delhi University, ad hocs are going to be converted into guests and the teachers’ association is going on a strike against this move — this seems to be the general understanding of the issue. But what does this mean for the University, at large?

Delhi University defines ad hoc and guest positions quite differently: ad hocs are positions to be filled when permanent faculty resign, retire, pass away, or go on leave. The appointments are made for four months and are renewed, if needed. Ad hoc faculty members usually have 16 hours of teaching to do. They mentor students in academic and extra-curricular areas, set assignment prompts and presentations, grade, invigilate and evaluate both internal and end-semester papers. They take a monthly salary as fixed by the University Grants Commission.

Guest faculty is hired to engage select classes and are paid for the hours they have taught for. The number of classes a guest teacher can teach is limited to eight hours a week by the UGC. So, to meet the classes an ad hoc meets per week, two members of guest faculty are needed.

The Delhi University assistant registrar in a circular (dated August 28, 2019, No: CB-II/Cir.No.32(a)/2019/317) addressed to “All Principals/Directors, Colleges/Institutions” informed:

“The colleges are…advised to fill up the permanent vacancies at the earliest and till permanent appointments are made, Colleges may appoint guest faculty, if required, against new vacancies arising first time in academic session 2019-2020”.

The circular is clear about “new vacancies arising first time in academic sessions 2019-2020”. But many Delhi University college principals interpreted this in a strange way and refused to renew the contracts of ad hoc teachers who were already in service. The argument seems to be that if somebody’s contract ended and you were renewing it, it would be regarded as a “new vacancy arising first time in academic session 2019-2020.”

How did the ad hoc teachers and other permanent teachers find out about this major change in rules?

Not only did most college principals not issue renewal letters in November 2019 (the earlier contracts were issued in July), but they also denied ad hocs their November salaries (some colleges gave the salary till the 19th). Thus people were not paid for the work they had already done! Members of the faculty found out about this situation only after their existing contracts lapsed. Most of them were invigilating, setting question papers and evaluating after November 19, when they were not even on the rolls of the University.

Delhi University clearly stipulates that only teaching members on the University rolls can invigilate. That would mean if a person who is legally not responsible to the University signs off on internal assessment records and answer scripts, all of it is null and void, if not downright illegal. So what happens to the papers of tens of thousands of students who were invigilated by ad-hoc teachers who were removed from the rolls after November 20? 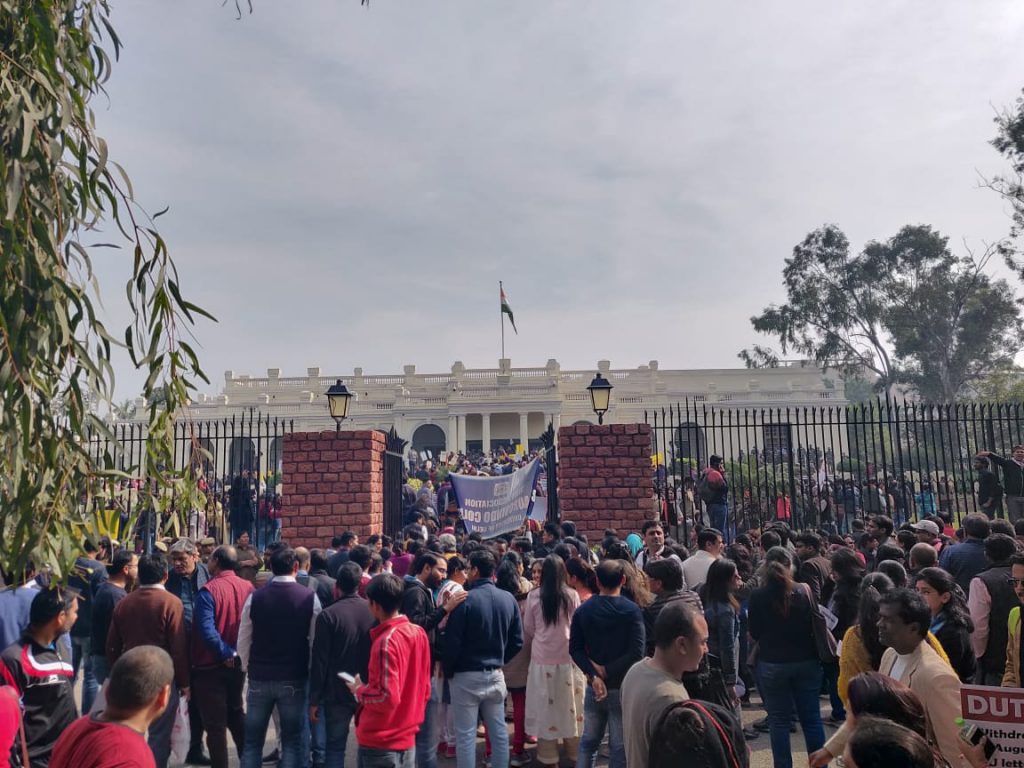 Do students have to take the exams again? Some of the ad hoc teachers have been part of setting question papers after what has become their last working day. What is the validity of these question papers? What happens to the marks awarded by ad hoc teachers on end-semester answer sheets which were evaluated after their contract lapsed?

Can’t the colleges give teachers appointment with retrospective effect, that is, from November 21, accounting for a one-day break of November 20, and legalise all this? Yes.

The retrospective measure has been taken earlier in the name of technical delay and it can still be done. But we seem to be looking at a paradigm shift and that shift makes such a step difficult, if not impossible.

We are not talking about 10 or 15 people here, but more than 4,000 teachers. That is a lot of people to replacement jugad for!

So who is responsible for creating such a crisis in the middle of a hugely important exam season, when students have much to worry and be anxious about?

The August 28 circular is not immediately responsible for this. It is the principals who used their (what looks to me) bizarre English comprehension skills to interpret the circular to humiliate and deprive their ad hoc teachers, the very people they should be taking care of as heads of institutions. Equally to be blamed is the University administration, which did not issue a written clarification on the matter even when doubts came up.

The political leadership should have intervened and set things right. But there has been no word from them either. More than 1,30,000 students and tens of thousands of teachers are essentially left on their own.

This is not to say that the August 28 circular is not dangerous. It is, as the workload of an ad hoc position equals two guest positions, with terrible academic implications for the students, financial implications for the faculty and the university too. Instead of an ad hoc, if colleges hire only one guest then they simply won’t be able to function, as the number of classes to be engaged does not change. There seemed to have been no thought on these aspects. If this circular is valid, the University will struggle to take care of its basic teaching work from January 1, 2020.

Rather than the nefarious nature of the design, one ought to be appalled by how inefficient, ill-thought out, impractical and even crazy this concocted crisis is. Even if they want to contractualise teachers and ruin the goodwill of public universities to support private interests, they need to do some thinking and some technical paperwork to make it legal.

The Delhi University Teachers’ Association has called for a first-in-a-decades boycott of invigilation and teachers have collectively decided to keep away from evaluation as well to make sure that the administration acts. When people in charge of institutions are either criminally clueless, brutally self-serving or appallingly indifferent, the only way is to be out on the road saying precisely that: you are pushing a whole set of students and teachers out on the road and wasting the potential of the very institution which will be completing 100 years soon.