Feb 12, 2020
Spread the love
Union HRD Minister Shri Ramesh Pokhriyal ‘Nishank’ felicitates KV student Harsh Pandit for his efforts to run from Jabalpur to Delhi for a noble cause

Union Human Resource Development Minister Shri Ramesh Pokhriyal ‘Nishank’ met the Harsh Pandit, Student of Class VII in Kendriya Vidyalaya No. 2, GCF Jabalpur, who has been on Marathon run from Jabalpur and finally reached his destination at India Gate in New Delhi today.Harsh Pandit started his Marathon on 26th January 2020 from Jabalpur and covered approximately 900 KMs in 18 days to reach New Delhi with a message of Pollution & Plastic Free India and Water Conservation.

Union Minister complimented Harshfor his efforts to run from Jabalpur to Delhi for a noble cause. Shri Nishank motivated the student and his family to further take up this awareness drive toward Plastic Free India and Water Conservation. HRD Minister appealed all students to take up awareness drives in the direction of Environment Conservation. 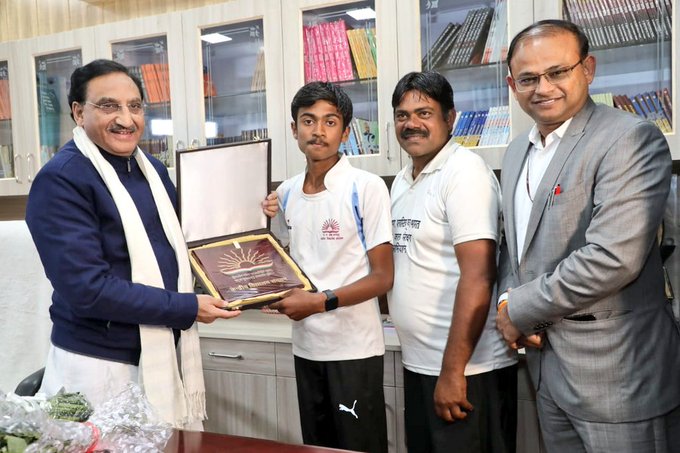 17 people are talking about this

KVS Commissioner Shri Santosh Kumar Mall received the young athlete at India Gate along with other senior KVS officials. He congratulated the student and his family for taking up this long marathon for the cause of Plastic Free India and Water Conservation.

Received by a cheering crowd of KV students and Teachers at Amar Jawan Jyoti, India Gate, Harsh was overwhelmed with this success at this young age. Harsh’s father Sh. Himanshu Pandit also accompanied his son supporting and running with him. Harsh covered 50 KMs daily on an average to reach his final destination.

Discussing about his aims behind this long Marathon, Harsh said that I was inspired to spread the message of Plastic Free India and Water Conservation. My father supported me throughout to achieve this target. I am also thankful to my Teachers and Principals for providing moral support.

Harsh’s name is likely to be recommended for the Guinness Book of World Record and Limca Book of Record.

Ministry of Skill Development and Entrepreneurship