Total Forest and Tree Cover rises to 24.56 percent of the total geographical area of the Country

Total Forest and Tree Cover rises to 24.56 percent of the total geographical area of the Country

In a remarkable feat, forest and tree cover has increased by more than 130 million hectares in the last four years: Union Environment Minister

The Union Minister for Environment, Forest and Climate Change, Shri Prakash Javadekar today released the biennial “India State of Forest Report (ISFR)”, in New Delhi. The report is published by the Forest Survey of India (FSI) which has been mandated to assess the forest and tree resources of the country including wall-to-wall forest cover mapping in a biennial cycle. Starting 1987, 16 assessment have been completed so far. ISFR 2019 is the 16th report in the series.

Announcing the results the Union Minister said that India is among few countries in the world where forest cover is consistently increasing. Shri Javadekar told that in the present assessment, the total forest and tree cover of the country is 80.73 million hectare which is 24.56 percent of the geographical area of the country.

In the present assessment, the total #Forest and tree cover of the country is 80.73 million hectares which is 24.56 per cent of the geographical area of the country: Environment Minister @PrakashJavdekar #GreenIndia 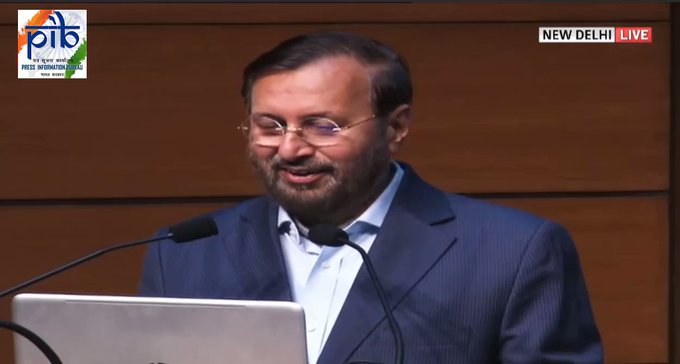 23 people are talking about this

The Environment Minister further said that as compared to the assessment of 2017, there is an increase of 5,188 sq. km in the total forest and tree cover of the country. “Out of this, the increase in the forest cover has been observed as 3,976 sq km and that in tree cover is 1,212 sq. km; Range increase in forest cover has been observed in open forest followed by very dense forest and moderately dense forest and the top three states showing increase in forest cover are Karnataka (1,025 sq. km) followed by Andhra Pradesh (990 sq km) and Kerala (823 sq km).”, said the Minister. 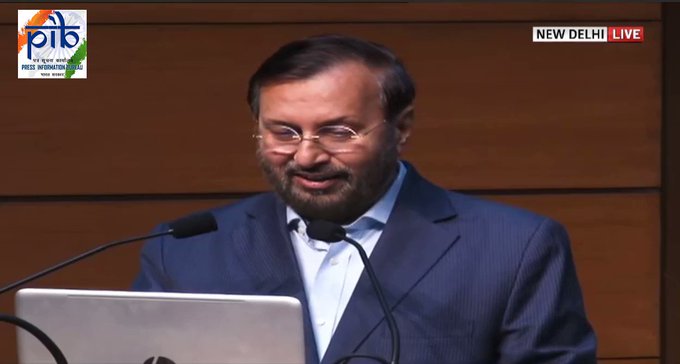 66 people are talking about this

Area-wise Madhya Pradesh has the largest forest cover in the country followed by Arunachal Pradesh, Chhattisgarh, Odisha and Maharashtra. In terms of forest cover as percentage of total geographical area, the top five States are Mizoram (85.41%), Arunachal Pradesh (79.63%), Meghalaya (76.33%), Manipur (75.46%) and Nagaland (75.31%).

Wetlands within forest areas form important ecosystems and add richness to the biodiversity in forest areas, both of faunal and floral species. Due to importance of wetlands, FSI has carried out an exercise at the national level to identify wetlands of more than 1 ha within RFA.  There are 62,466 wetlands covering 3.8% of the area within the RFA/GW of the country.

ISFR 2019 is the 16th report in the series. In tune with the Government of India’s vision of Digital India, FSI’s assessment is largely based on digital data whether it is satellite data, vector boundaries of districts or data processing of field measurements.

The biennial assessment of forest cover of the country using mid-resolution Satellite data is based on interpretation of LISS-III data from Indian Remote Sensing satellite data (Resourcesat-II) with a spatial resolution of 23.5 meters with the scale of interpretation 1:50,000 to monitor forest cover and forest cover changes at District, State and National level.  This information provides inputs for various global level inventories, reports such as GHG Inventory, Growing Stock, Carbon Stock, Forest Reference Level (FRL) and international reporting to UNFCCC, targets under CCD, Global Forest Resource Assessment (GFRA) done by FAO for planning and scientific management of forests.

Satellite data for the entire country was procured from NRSC for the period October, 2017 – February, 2018. The satellite data interpretation is followed by rigorous ground truthing. Information from other collateral sources are also used to improve the accuracy of the interpreted image.

For the first time, Ortho-rectified satellite data has been used for forest cover mapping due to its better positional accuracy as it removes effects of image perspective (tilt) and relief (terrain) and scale distortions in the image to represent features in its true positions for accurate measurement of distances, angels and areas.

FSI, in a first ever attempt has carried out a rapid assessment of biodiversity for all the States and UTs (except two) and for all the sixteen Forest Type Groups as per Champion & Seth Classification (1968).  Apart from the number of tree, shrub and herb species as observed in the survey, Shanon Wienner Index which gives species richness along with the relative abundance, has also been calculated for each forest type groups in each State & UT.

FSI has carried out mapping of forest types of India as per the Champion & Seth Classification (1968), for the first time in the year 2011 based on the base line forest cover data of 2005. A new exercise for refining and updating the forest type maps as per the latest baseline forest cover was initiated in the year 2016 and has been completed in 2019.

A study to assess the dependence of the people living in close proximity to forests for their day to day needs like fuelwood, fodder, small timber and bamboo was undertaken by FSI during September 2018 to June 2019. Findings of the study in various States/UTs has been presented in the report.

The present report also gives information on the fire prone forest areas of different severity classes, mapped in the grids of 5km x 5km based on the frequency of forest fires in the last 14 years that would enable the SFDs to manage and control forest fires effectively in the respective States.

Non Timber Forest Produce (NTFP) are important source of livelihood for many tribal communities and villagers living in the proximity of forests. A new information has been generated from the national forest inventory data about the top five NTFP species in each State & UT in terms of their availability in forests i.e. relative occurrence. The information has been presented in the respective sub-chapter of each State & UT of the country in Vol II.

Invasive species pose serious threat to the sustainable management of forests. Analysis of NFI data has been done for determining five major invasive species in each State & UT and also an estimate of area affected by them. This information has been presented in the respective sub chapter of each State & UT of the country in Vol II.

The information given in the report would provide valuable information for policy, planning and sustainable management of forest and tree resources in the country.