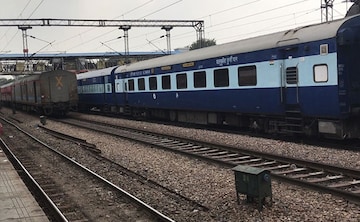 Tatkal tickets: Tatkal Charges have been fixed as a percentage of fare at rate of 10% of basic fare.

Indian Railway Catering and Tourism Corporation (IRCTC) which is the only authorised entity to sell tickets of Indian Railways online via its portal irctc.co.in and web application IRCTC application also allows users to book Tatkal tickets from its website and applications. IRCTC Tatkal train ticket service of Indian Railways allows passengers to book train tickets on an urgent basis. Tatkal tickets are issued for actual distance of travel, instead of end-to-end, subject to the distance restriction applicable to the train. While booking Tatkal train tickets, the passengers have to pay more than the actual ticket price.

Tatkal ticket bookings on the IRCTC web portal and mobile application open at 10 AM for air-conditioned (AC) classes and at 11 AM for non-AC classes one days in advance of the actual date of journey.

Tatkal tickets are issued issued for actual distance of travel, instead of end-to-end, subject to the distance restriction applicable to the train. The same Tatkal berth/seat may be booked in multiple legs till preparation of charts. At the time of preparation of charts, unutilized portion may be released to the General RAC/Waiting list passengers, Indian Railways mentioned on its website http://www.indianrail.gov.in/.

Tatkal train ticket facility is also available in executive class of Shatabadi Express trains by earmarking 10 per cent of the accommodation available that is 5 seats per coach, Indian Railways said.

Ticketing agents and web agents of IRCTC are restricted from the booking Tatkal tickets between 10:00 am and 12:00 pm, Indian Railways added.

This is the last page