Rubi Khatoon and Babli Karmakar are in a pensive mood. The weekly meeting for loan recovery and disbursal is set to be a stormy one. They ensure that their computer tablet is fully charged and throw in a few loose sheets of paper and a lunch box in their bags.

The meeting starts on a stormy note, as expected. An elderly woman alleges that her loan request for purchasing goats has been declined thrice. Rubi Khatoon looks into the tablet and pulls up loan records of the whining woman.

“We have already given you two loans of Rs 15,000 and Rs 10,000 each. So, a third loan demand is declined,” Khatoon replies. She handles bookkeeping of 32 women self-help groups (SHG) at Turup village of Angada block in Ranchi district.

Babli Karmakar’s meeting at Hessar Village also started on a sour note. Around five beneficiaries argued that a particular member is taking loans beyond her means in each meeting. In order to clear the confusion, Karmakar collates data on the tablet and shows to everyone the entire record of the loans disbursed in past six months to the particular member. The alleged member has, in fact, repaid her loans and had not applied for a new one.

Rubi Khatoon and Babli Karmakar are among 600 tablet girls trained by Jharkhand State Livelihood Promotion Society (JSLPS) to maintain financial records of around 40,000 women-run SHGs. Khatoon and Karmakar earlier used to keep the data of loans disbursed, date and proceedings of the meeting, amount recovery in a printed excel sheet or in a notebook. They would then physically carry hard copies of the transactions and details of the meeting to JSLPS office located at Radium Road in Ranchi. The data operator would then feed in the data into the computer server.

Khatoon would walk for half-an-hour to reach the bus stand and then travel on the bus for nearly one hour to submit the data. Karmakar would also travel nearly two hours to submit the data. “It would be a harrowing time for us during the summers and monsoons,” Khatoon said.

Amit Jain, Program Manager of JSLPS, told VillageSquare.in that they have killed three birds with one stone. Jain explains that bookkeepers were wasting time and money on transporting data. They were also dedicating two to three days every month just for carrying the data from the villages to the office. At the same time, banks and account officers would also constantly worry over the updating the loan data. It also delayed JSLPS future plans. 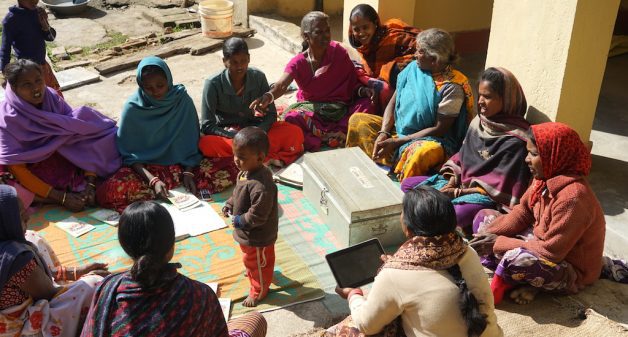 Babli Karmakar in the stormy meeting of women’s SHG at Hessar village. (Photo by Alok Gupta)

“One fine day, we decided to train our bookkeepers to operate tablets to submit data online. Our motive was to upgrade skills of rural girls and also to make the data green,” Jain says. “We were not very confident of rural girls, a majority of whom have never seen a computer or laptop, would be able to become adept at keeping digital records on tablets,” he said.

Then there were apprehensions like how would they charge tablets in villages where the power supply is dismal, will they get internet access or what about the security of the tablets?

Khatoon recalls the time when the JSPLS organized training sessions for girls to operate tablets. “I thought that I am never going to learn it,” she says. During the training sessions, 10 girls selected to use tablets were asked to play games on them. Karmakar says that the game was about matching vegetables, tomatoes with tomatoes, potatoes with potatoes and so on, and when the score added up, they would feel enthusiastic.

The girls were ready to use the tablets within a month. They took the tablets to their respective villages and started updating data on JSPLS’s Swalekha application. “These girls have reduced the time for updating data from 25 days to barely four hours,” Jain said. They ensure that tablets are fully charged before any meeting starts and have selected areas around their villages where the internet network is fairly good.

Around 40,000 women run SHGs disburses loans to families at an interest rate of 1.5 per cent under National Rural Livelihood Mission. The microfinance helps rural families to get loans for agriculture, animal husbandry or any income generating activities. It also provides loan for hospitalization and to buy medicines.

The decision for disbursal of loan is taken in weekly meetings of an SHG. Members of the SHG jointly decide whether the loan should be disbursed to a beneficiary or to decline it. Around four meetings are held in a month. “There are lots of data generated in these meetings. Apart from numbers, we also have to keep a record of decisions taken in the meeting,” Karmakar says. They also have to keep a record of weekly loan repayment that ranges from Rs 10 to Rs 1,000.

The tablet girls have become so adept at keeping the data for SHGs that they are demanding more work from JSLPS. “We are asking JSPLS to provide us more digital-based work to enhance our income,” they say. They don’t bring work home. The data is generating during the meeting itself and fed into the JSLPS server.

Jain agrees that the tablet girls need more income. “We have raised a platoon of girls adept in handling data digitally,” he said. “The project is now looking into ways to enhance their income.”

The tablet girls have been entrusted with an additional job of screening awareness-based videos to villagers. These include subjects ranging from women’s empowerment to vaccination. Efforts are also on to involve the tablet girls in banking activities.

Khatoon and Karmakar are busy updating data for livelihood projects. Ask them for latest data on livelihood projects, pat comes the reply, “we have data on the number of goats, cows, auto-rickshaws and even farm land in the village.” They would then say, “Are you on Whatsapp? We will SMS you the data.”

Promotion of FPIS FOR Herbal, Horticulture and Floriculture

Key to my success lies in meeting people and learning from them, Says Shri Naidu in his last speech as the Vice President of India