India’s proposal to include Great Indian Bustard, Asian Elephant and Bengal Florican in Appendix I of UN Convention on migratory species was unanimously accepted today at the ongoing thirteenth Conference of the Parties to the Convention on MigratorySpecies (CMS) in Gandhinagar.

The Government of India has declared Indian elephant as National Heritage Animal. Indian elephant is also provided highest degree of legal protection by listing it in Schedule I of the Wildlife (Protection) Act, 1972.

#UPDATE :#CMSCOPIndia
India’s proposal to include mainland Asian elephant in Appendix I of @BonnConvention accepted unanimously.

Move will promote conservation of Asian Elephant in its natural habitat as well as to reduce human elephant
conflict in range countries.#CMSCOP13 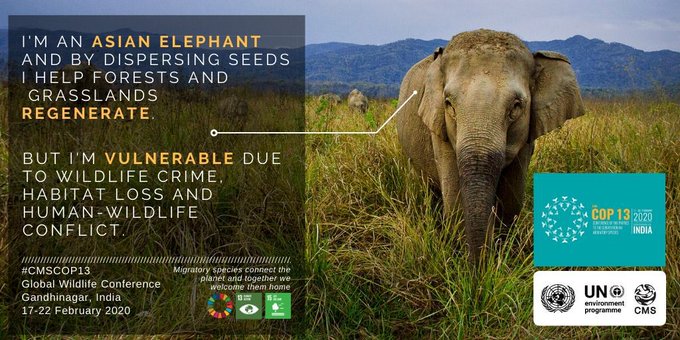 22 people are talking about this

Placing Indian elephant in Schedule I of the CMS Convention, will fulfil natural urge of migration of Indian elephant across India’s borders and back safely and thereby promote conservation of this endangered species for our future generations. Intermixing of smaller sub populations in Nepal, Bangladesh, Bhutan and Myanmar and widen the gene base of these populations. It will also help to reduce human elephant conflicts in many parts of its migratory routes.

Mainland Asian elephants/Indian elephants migrate over long distances in search of food and shelter, across States and Countries. Some elephants are resident while others migrate regularly in annual migration cycles; proportion of resident and migratory populations depends upon, size of regional populations, as well as on extent, degradation and fragmentation of their habitats.

The challenges confronting Asian elephant conservation in most elephant Range States are habitat loss and fragmentation, human elephant conflict, and poaching and illegal trade of elephants.

“India, being natural home of largest population of mainland Asian elephant/Indian elephant (Elephas maximus indicus), wishes to promote conservation of this species, by seeking natural migration of elephants in all range countries, through bringing the subspecies under Appendix I of CMS Convention”, said Shree Soumitra Dasgupta, ADG(Wildlife), while mooting the proposal which was unanimously accepted by the parties to the convention.

The Great Indian Bustard, an iconic, critically endangered and conservation dependent species, exhibits transboundary movements, and its migration exposes it to threats such as hunting in boundary area of Pakistan-India and power-line collisions in India. Inclusion of the species in Appendix I of CMS will aide in transboundary conservation efforts facilitated by International conservation bodies and existing international laws and agreement. 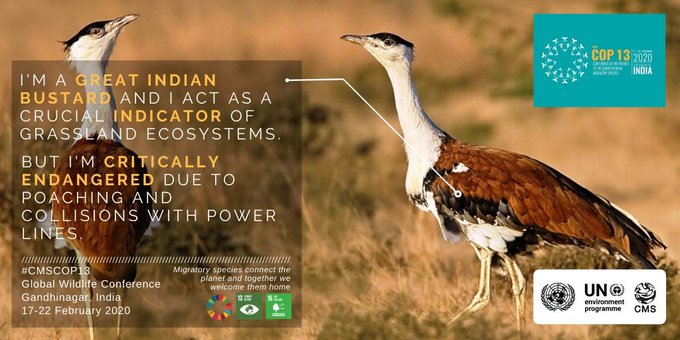 76 people are talking about this

The Great Indian Bustard is a Critically Endangered species with a small population of about 100–150 individuals that is largely restricted to Thar desert in Rajasthan, India.The species has disappeared from 90% of this range; their population has reduced by 90% within 50 years (six generations); and their threats are expected to increase in future.

The Bengal Florican an iconic, critically endangered species of topmost conservation priority, exhibits transboundary movements, and its migration exposes it to threats such as land use changes, collision with power transmission line at boundary area of India-Nepal and probable power-line collisions. Inclusion of the species in Appendix I of CMS will aid in transboundary conservation efforts facilitated by International conservation bodies and existing international laws and agreement.

Populations have declined as a result of habitat loss, hunting and the species no longer breeds outside Protected Areas in the Indian subcontinent, except in a few areas of Assam.

The CMS Conference underway in Gujarat has kicked off the Super Year for Environment, which will include a UN Summit in September and culminate in the UN Biodiversity Conference at the end of 2020, when a new global biodiversity strategy for the next decade will be adopted – the Post-2020 Global Biodiversity Framework.

Steps taken to promote renewable energy sources in the country